A bow to Semadar Megged

The Rabbi's Daughter by Reva Mann (2007)  - an unpleasant read. Too much sex told too vividly: the main character is young and desperate and continuously makes decisions based on a desire to escape from her loneliness, and I found I had little patience for her desperation, though I finished the book to see what happens, because I am a compulsive finisher. The Jewish Orthodox lifestyle rang true as described there. It was interesting to find out what their rules are for sex. Less stringent than I'd heard.

On the other hand, I read Enrique Vila-Matas' Never any End to Paris, which he wrote in Spanish in 2003 and which was translated by Anne McLean in 2011 (New Directions Publishing). It is very well translated, in the sense that it is fluent and one does not feel any obstacle between oneself and the author's thoughts:  the style is limpid. Reading Vila-Matas reminds me of when I first plugged earphones into my ears and listened to someone speaking: the voice seemed to exist in my head as if there was nothing between my ears except the words passing through, like a beam of light in the dark. 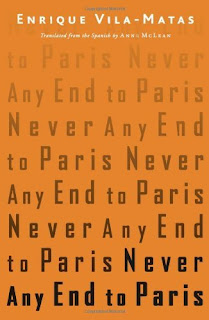 I liked the cover and all that it hints at: this is the second time I've come across a cover by Semadar Megged, and I think she does it intelligently; it is a pleasure to wonder about what she has done and why, though the poor translator deserves a bigger font here.

I want to read this book a second time because it is so rich. I want to understand as much as possible what is in there. Vila-Matas mentions Hemingways' iceberg theory of the short story: never tell what is most important. He writes ironically about irony, and my feeling is that Hemingway - who is a major figure in the book - Hemingway took himself immensely seriously.

The book contains other strong presences: the city of Paris, with its cafes and grey streets, Marguerite Duras who lets Vila-Matas live in her garret, his best friend Raul Escari, and all the other famous people who lived in the garret before him.

All of this divided into 113 sections in lengths varying from several pages to short paragraphs. Why 113, I wonder? All I know is that it is a prime number the three cifers of which can be permutated to form two other prime numbers, 131 and 311...