Bodil Malmsten's new book is out - The Last Book from Finistere, but only in Swedish. I have no Swedish and there are no plans to translate. I found a webpage which translated her entire webpage, from Swedish into English, and that was great. She writes about events worldwide. Quotes for example one article entitled Poor Volvo - apparently orders are down to ONE TRUCK per day! (I am always curious about Sweden). Also quotes from newspapers in the US and France, good coverage.

Today my turn for a review by the group. Two poems are in deep trouble, Meeting the House and Upon reading the National Geographic. I keep trying and trying to improve them, but they do not find favour. I try to see them through other people's eyes, hear them with other people's ears, and learn. All I can think of right now is that the expression 'a cold shoulder' is weird, for some reason. I use it to describe the way the flight of concrete stairs leading to the porch and to our front door is angled away from a person arriving up the path, as if to say, You may be here, but we are not really interested. I think that I need to re-write Nat Geo completely, and have an idea that it might work, I feel relatively optimistic there. Have re-written Meeting the house already, more detail, more help for the reader - for Hinemoana said, Maybe it is under-written.

The feedback today was more muscular, to the point, no tiptoeing- it has given me something to work with. (There are some bruises, part of growing up, I think, like learning to be an acrobat.) I'll keep writing - other stuff- and then look back at these poems one day and probably wonder how I could not see what was wrong. 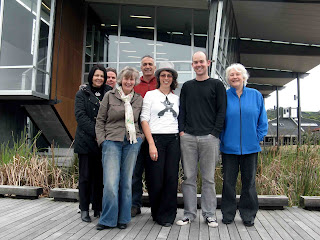 Here's a photo of our group taken last week, in front of Whitireia's library, with Hinemoana in the middle (white T-shirt). We are looking out over the lagoon which has ducks and gulls, towards the green Kapiti hills, low under a vast expanse of blue sky. Beautiful.

Discussion at lunch with the others about meeting up once the course is over: that will happen, I am happy.
We prepared for the gig on Monday at the pub, Howltearoa. I shall sing Yedid Nefesh, with the old familiar tune. Just the first stanza.

One thing I realise I have learnt during this year, which was wrong with the novel-in-process, and now have an inkling how to remedy - the cloying sweetness. A sweet story about Nazis. Yes.

In one of Elizabeth's emails, she mentioned Maxine Kumin - I might like her work. Well, she is one for me: no frills, and funny. Look here for some of her poems, Woodchucks is my favourite.
Posted by Michalsuz at 19:52