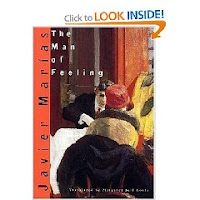 A friend lent me a short novel entitled The Man of Feeling by Spanish author Javier Marias,(1986, New Directions Books) in an excellent translation by Margaret Jull Costa (2003) (except for the use of the word 'teddy' to describe an item of woman's lingerie - though I admit to not knowing what else to call it). Her name rang a bell - a short search revealed that she is also the translator for some of Nobel-Prize winner Saramago's books. She has won several international prizes for her work.

A short book - an unusual format, a bit wider than the palm of my hand. The predominantly orange cover reproduces an Edward Hopper painting - a couple in a New York restaurant - wonderfully suited to this story, showing the isolation and alienation that characterise the lives it describes.

Reading this book, I developed a fondness for the designer Semadar Megged, her orange tones on the cover pleasingly contrasting a page of mat blue in the prelims (what is such a page called?). The elements of the book are harmonious, the typeface classical, the margins narrow, the page numbers at the bottom of the page surmounted by a delicate horizontal line - it is all pleasing.

Yet the characters are not to be liked. How does the author manage this, to describe these entirely credible people in their loneliness and desire for ownership of another, and keep the reader wanting to know what happens next? I did not care for these damaged and damaging people, for their passivity and lust for power.

The answer lies I think in the way Javier Marias writes: in his long sentences with many subclauses which roll on and on in an un-English way, he describes the inner world of the main protagonist, a self-absorbed opera singer who believes he has fallen in love. We witness in tremendous detail the development of his thoughts, the minute changes of colour and emphasis, like a pointillist canvas, which lead him to consider his past, his future and his wish to destroy, and to relate the dream which torments him. Marias is a tremendous observer and thinker - his voice comes through as a truth-teller - as for instance in the following paragraph (p.158):

...Manur had already been abandoned by Natalia, although he did not know it then. Nor did I: most of the time one does not know when one has been taken up and when one has been abandoned, not just because this always happens behind one's back, but because it is impossible to pinpoint the moment when such upheavals happen, just as one never knows if the fact of being taken up has to do with one's own merits or virtue, one's own unrepeatable existence, one's own decisive intervention or, rather, merely to one's casual insertion into another person's life. ..."

See what I mean?
A tremendous writer.
Posted by Michalsuz at 20:52

A teddy can also be called a camiknicker, which seems like an infinitely more interesting word to me!
I've got a blog now too 'Suzannah' for the MA year, if you felt like linking your blog to it. :)